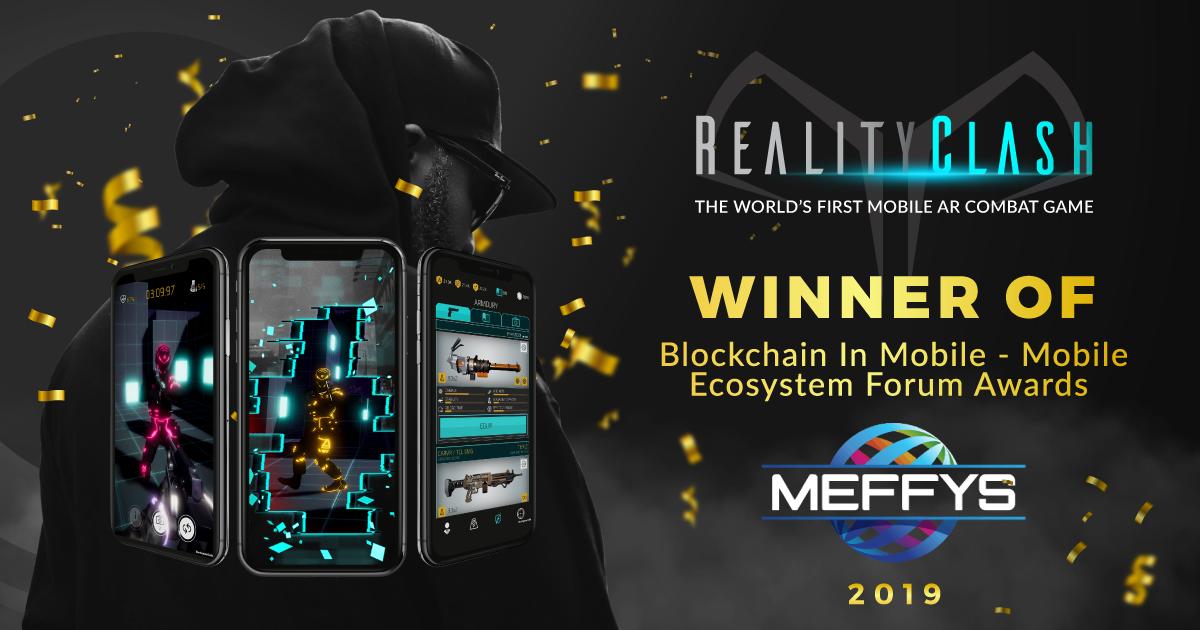 Another edition of the Reality Clash Developer Diary series is here and this month we are discussing award nominations, events and future game features…

Although Winter is almost upon us and the nights are getting colder, things are still heating up for Reality Clash. This month, we were delighted to have been chosen as Winner of the ‘Blockchain in Mobile’ category of the 2019 Meffy’s awards.

A huge thank you to all of the MEF members who voted for us, the other entrants and the organisers for the time and effort they put in to host such a great conference!

We don’t like to brag (here we go anyway…) but the win has also coincided with several other award nominations for the studio. It is a fantastic feeling to have received recognition for our project and we’re proud to be in the running for these prestigious industry awards.

October is a busy month with several important games industry events and conferences taking place. You can find out which events the Reality Clash team will be attending here.

If you’re going to any of these events, come and meet the team!

Our CEO and Co-Founder Morten Rongaard will be attending the Crypto Games Conference and speaking at the event on ‘Breaking The Boundaries of AR Gaming’ and several panel discussions. Hopefully he will also be taking home an award from the conference as we are in the running for not one, but two awards in the Best Blockchain Games & Best AR/VR Game categories.

He will be busy, but Morten will also be hosting an exciting Reality Clash gaming competition for attendees, with an impressive RCC prize pool!

As discussed in previous editions of the diary, we have been spending the past few months improving the current MVP game version and dealing with any bugs that are encountered – but as we move forward into 2020, we have an extensive roadmap of features that we intend to implement. The specifics of these features have been ironed out over the past few weeks and prioritised into a development schedule.

Finalising this schedule has been a great experience because it has given us a chance to talk about how we each see the future of Reality Clash. As a team, we all have a similar vision for the project, but the differences in opinion also help us to analyse the game from varying perspectives and build something unique. We’re really excited to introduce these new features to our players and we are also grateful for all of the feedback that they have provided so far.

Some of the features we have planned are highly ambitious and so part of the next phase for the studio is a fundraising round. As reported in press recently, all potential investors will have the opportunity to become shareholders in Reality Gaming Group. This process will also see our Digital Asset Trading Platform and Reality Platform being made available for licensing to 3rd party developers.

You can expect to see some major changes and improvements to Reality Clash throughout 2020 and beyond, so if you’d like to be part of the journey as a shareholder – you can register your interest for the STO here or keep an eye out on our social media for more information.

We are always open to opinions about improving the game or trading platform, so if you want to give us some feedback or request more information, you can email us directly at: info@realityclash.com

See you next month!